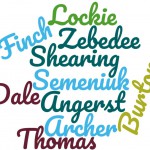 Welcome to One Big Tree

How the Zebedees arrived in Canada

In the photo to the left you will see James Zebedee, Bill’s great great grandfather.  James was born in 1858 in England to John Charles Zebedee and Fanny Dale.  Fanny had a child, Henry, before she married John.

John was killed in a work accident in February 1868, when he fell from a scaffold.  It was widely publicized in local papers.

Fanny would die in September 1868, from erysipela.  At the time of her death she, James and Henry, lived in the Poor House on Shaftesbury St in Fordingbridge, Southampton, England.

In 1871 James, and later that year, Henry, would be sent to Canada to live at Marchmont Homes in Belleville, Ontario.

This is the story of many branches on a tree.

That brings us to Bill, who has married Helen Rachel Thomas; whose family tree is also included on this page.

Have not been able to find Christobel or Joan.

Available here you will see a complete list of surnames in One Big Tree.  Click on the name (ie. Zebedee) and it will take you to the list.  From there you can move forward or back through time and names.

This link will take you to the photos Bill has collected, or has been provided, over the years.  Please respect the person’s property and do not use without permission.

Some of the links Bill has used over the years to help him in his research.